It's that time of year again: FIFA season.

For many of you, it'll be your first time taking a plunge into the ultimate football simulator. As a football fan, how many times have you been in a pub, or school playground and put together the best squad of 11 players to create a Dream Team? In "Ultimate Team", you have the opportunity to do just that, buy winning matches, earning coins, and buying and selling as you assemble your Ultimate Team! Your starter packs are much better this year, giving you a quick and easy start.

What is the best way to start your Ultimate Team?

Okay, if you're really new to FIFA Ultimate Team (FUT), then I recommended you give 20 minutes of time to the tutorial to get you going. It gives you a basic guide to team chemistry, and gives you a game against the CPU to get a feel for the mechanics (Ultimate Team is a little more arcade style than conventional gameplay, so bear that in mind), and to settle in.

Sadly, you don't get to keep the team you are playing with, I know I'd want Zlatan Ibrahimovic on my team from the start.

The next step is you open your starter pack and you get your set of 23 players, a mixture of Gold, Silver and Bronze. EA deserves some props for this, as they've actually been more generous this year with the starter packs by giving you better players. With 45 games on their contract instead of the seven they've had in previous incarnations, you also get to keep players for a much longer time. The only downside to this is, you can't sell or discard any of the players you start out with, they are there for good.

Now, here's a great little tip if you know friends that own the game OR if you know people on the forums that could help you out - In the EA Sports Catalog, a new feature in FIFA 14 lets you be able to GIFT people on your friends list. And in said catalog, there are some very nice boosts available. I recommended starting with the biggest boost first, the "1,000 x 15 games" boost. What it does is, for 15 games, regardless of result, EA gives you an extra 1,000 coins. This will give you a huge headstart and getting a better than average team right from the get go. It is effectively 15,000 free coins.

And what's even better, is that you only spend half the number of catalog points of what you normally would normally spend, so it is more accessible to more players. Grab a friend, help each other out and you can get a huge advantage on the majority. You'll quickly realize, 15,000 coins can easily get you eleven decent gold players to start your first full team. Taking advantage of games versus the CPU will help you get more coins fast.

Take advantage of the CPU

I know, it's a very tempting thing to head straight to online like a bull in a china shop...Bad idea. Why? Let me explain.

I'd say around 75% of people who play FUT, have done so in a previous FIFA game and already know what they're doing. Many players have already opened loyalty packs that they got for playing FUT on FIFA 13. By doing that, they're going to have more gold players in their team, via opening said packs then likely selling their contents to get more coins, to buy more specific players. So chances are, if you play online immediately, even if you're a good player, you're likely to lose in Division 10, due to opposing teams being much stronger.

There's more efficient ways of maximizing your early earnings and setting yourself up for the future. See the Team Of The Week? Early on, you're going to want to challenge that team often. Don't let the high ratings intimidate you either, It's 150 bonus free coins and the team is laughably easy. This is because in Ultimate Team, team chemistry is the single most important factor, and because TOTW uses a range of players from all over the world, and often many players playing repeat positions have really low chemistry scores making them really easy to take down. I won 6-1 first time around using the starter team, full of mostly bronze players. Seriously.

After that, you're going to want to head for the offline tournament section and take on the "Starter Cup". Again, very, very easy stuff. It's a three game tournament and when you win, you'll get 500 extra coins (On top of the 1,000 if you've been boosting), as well as a free pack of club customization cards. The pack has 12 cards, a mixture of bronze, silver and gold cards as well as club crests, maybe a ball or two, and a couple of stadiums and kits.

You can easily sell these and make a few extra coins on the side.

If you've followed this guide so far, there's a good chance you have around 5,000 coins by now, and you've only had to play four games! Now, you're ready to build a stronger, gold level team. Starting out has never been easier, especially with a friend.

I would recommend having 6-8,000 coins before properly building in one go, as you can be a little more organized, but this is definitely something you can do as you go along, as with the biggest Football Club boost, you'll be getting 1,000 extra coins for the first 15 games.

Set yourself a budget, you can roughly work it out with your coin total, divided by 11. Also, bear in mind rare gold cards (The shinier gold, with pointed card design) are automatically worth 650 coins minimum, because that's what you can discard them for. This means you might want to target non-rare gold cards instead, which only have a 300 coin minimum value.

In addition, you're going to want to focus on either a single nationality or league. This makes teams with high chemistry play SO much better (Even if the individual ratings aren't the best), and it will win you games. There are quality cheap players in every major league, so don't feel you need a Wayne Rooney or a Gareth Bale in order to win immediately. Build a team with great chemistry first, and go from there. Early on, it could be the difference between promotion in "Seasons", and relegation.

And don't worry if you feel like you can't do that straight away. EA is rewarding consistent play with cards, giving an extra chemistry point as a "loyalty bonus" after 10 games used with them. This applies for any player bought from the auction block, even if he doesn't completely fit your system right away.

One more thing, you automatically get the loyalty bonus for any player you get in a pack. Hooray!

That will just about do it for this part of the guide. I have a little more advice when it comes to trading which I'll cover in a future article. If you have any helpful tips you care to share, feel free to comment below!

This is my first year of trying Ultimate Team with FIFA 14. I'm actually a huge NHL fan and have been playing that for a long time... but what's interesting to me is that I'm actually enjoying the Ultimate Team experience in FIFA a little better because I don't follow soccer. Since I'm not familiar with a lot of the stars I find myself being content with the high 70-80s players and not obsessing over a "dream team" like I have been with NHL 14. I'm focusing more on underdog status and gameplay rather than top names. Because I know the names and faces of every top 100+ players in NHL 14 I've been a bit hell bent on getting my top team just right. For instance my top line is Ovechkin - Gretzky - Datsyuk (Which I'm hoping to trade for Crosby soon)... not to mention my blue line stars Weber, Karlsson, Subban, Jones, and Price between the pipes.

It's actually kind of a cool experience when you don't follow the sport.

Just thought I'd correct a small error. The TOTW Challenge is more than 150 coins, according to difficulty. I'd recommend going up to at least World Class, or even Ultimate if you're confident in your ability, as you can get up to 1,000 coins per week!

Look out for more FIFA Features soon, including team reviews!

You'll get **** 99% of the time, and you'll hate everything about life and FIFA because of it, but then one day you'll pull something truly awesome (In my case, an Eden Hazard that sold for 201,000 coins) and it will be a gamechanger. You'll have enough in that moment to completely transform your team into a damn formidable side.

It just sucks that it takes like 10 games to earn enough for a Premium Gold Pack (Don't bother with the regular Gold Pack). Unless you've got some spare real money you feel like throwing at it, which I did on occasion and is probably what sped this process up.

I started a month ago. This was my team after Night 1 of playing with it: 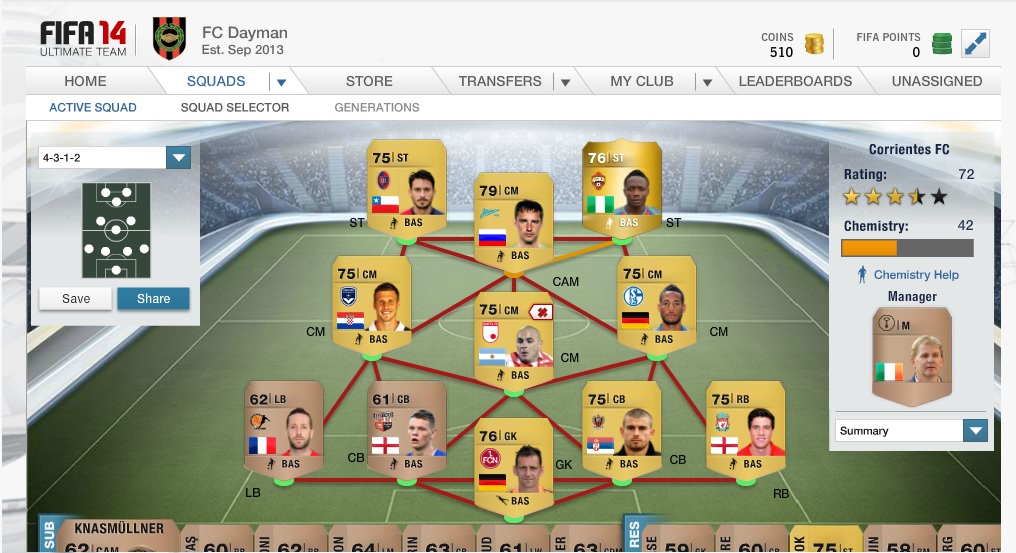 This is my team now: 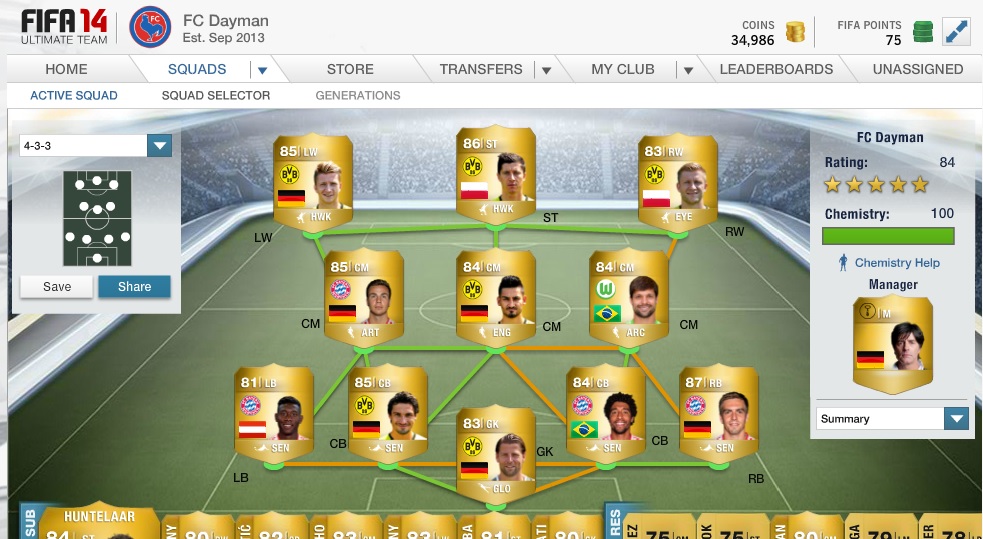 So, yeah, just keep pulling cards and hope for some luck along the way.