Which players would you expect to have the highest-rated cards in MyTeam three months into NBA 2K16's lifespan?

These are just a few of the ridiculously rated diamond cards (the tier assigned to players with a 95 or higher overall rating) who can currently be used in MyTeam's Gauntlet mode, and will eventually be included in throwback packs, like Crawford was last Thursday.

The folks at Visual Concepts just took an excellent idea -- releasing throwback cards based on historic single-game performances -- and completely botched its implementation by rating these career role players above NBA legends.

Whenever Jordan, Bird and many other legitimately great historic players are released in MyTeam, how much impact can they really have on the court when they aren't rated as highly as some random NBA role players? Diamond Ty Lawson has a 97-rated three-point rating, for instance, which beats out Larry Bird's 94 three-point rating. Diamond Luis Scola has rebounding, dunking, shooting and post-up ratings similar to Kareem Abdul-Jabbar's, although the latter card probably won't be available until this spring and will take MyTeam players over 100 Road to the Finals wins just to unlock.

Since all of these new throwback diamonds are instantly better than any attainable reward card currently in the game, I have to wonder, what's the point of playing Road to the Playoffs, Domination, Challenges or Gauntlet games anymore? The MT payouts were already pitiful, but now there's no incentive to keep grinding out matches to finish collecting a bunch of inferior reward cards. After all, Brandon Jennings has somehow become a more reliable shooter than the reward Chris Mullin, and Jamal Crawford's Super Saiyan form is a far superior option at point guard compared to the reward Jason Kidd.

Until last week, Visual Concepts had been doing a decent job with most of MyTeam's card ratings, thanks to NBA 2K16's new "legends scale." The developers also seemed like they had learned from last year's mistakes by ditching dumb ideas like pink diamond typing contests, and avoiding absurdly rated cards like NBA 2K15's 99-speed ruby Blake Griffin. NBA Street's attribute ratings were actually more realistic than some of the ludicrous cards that Visual Concepts came up with last season.

NBA 2K16's "special moments" cards definitely weren't happening as frequently as the community wanted to see, but at least popular players like Hassan Whiteside, Kristaps Porzingis and Andre Drummond were getting their ratings slightly boosted to celebrate standout performances, while simultaneously respecting the game's legends scale. If throwback J.R. Smith, Jamal Crawford and co. had followed that same ratings pattern -- and simply become another set of sought after gold-tier cards -- then this article wouldn't need to be written because no one in the NBA 2K16 community would have been bothered.

But MyTeam's producers did an abrupt 180 last Thursday -- a quick turn so awkward, even Jill Valentine viewed it as an ugly maneuver -- deciding that the company was suddenly more interested in making some quick cash by pushing all their chips into the center of table and laying down some of the best possible cards (just in time for Christmas break). They could have continued to maintain a balanced mode where God Squads aren't common, and player ratings have room to gradually ramp up as the NBA season progresses, but clearly MyTeam's overlords decided against that concept. Either way, now card ratings can't go much higher than these throwback diamonds.

And the only way to acquire these cards right now is by opening the most expensive packs in the game. From there, you have to pray that you can beat what I'd assume are one percent (or less) diamond pull odds. I say that's the "only way" because no normal NBA 2K16 players are going to have the one million in-game currency that's required to bid on of these cards in the auction house, unless that one million MT was purchased from an illegal coin-farming website.

Here's how I think Visual Concepts should have handled this situation:

1. Rate these cards according to the “legends scale.”

2. Release an offline challenge on Superstar difficulty and Simulation settings for each throwback card, where you can win an unsellable copy of the player by scoring as many or more points than he did in his special moment game.

3. Give that reward version an unrenewable 12-game contract limit. That's enough games to get through one seed of Road to the Playoffs. After its contract expires, the card will still count toward your collection total.

4. If you're lucky enough to pull one of these cards (they should be found in moments packs and throwback packs), it will come with the standard amount of renewable contracts, plus it can be bought/sold from the marketplace just like any other normal card.

5. If you complete the entire series of throwback moments challenges (scheduled to stop after the NBA Finals), you'll receive five special items that'll allow you to "resurrect" five of your throwback moments cards and turn them into usable/sellable cards that'll come equipped with infinite contracts.

This way, Visual Concepts still gets their money from people opening card packs, but frugal MyTeam players can also get a taste of these throwback moments cards if they're good enough at playing the game.

Even after four patches in three months, MyTeam still has lots of important problems to fix. Releasing cheesy diamond cards with made-up fantasy ratings has not helped any of the mode's central issues -- it's only created another reason for people to stop playing MyTeam.

Oh, and just to be clear on what some of these current issues are, here you go:

-There are tons of historic players with incorrect badges, tendencies, animations, appearances and missing playbooks.

-Challenge mode continues to suffer from a severe lack of interesting, timely and rewarding events.

-No new Gauntlet boards have been added since launch day, even though that was one of Visual Concepts' pre-release promises.

-Since releasing NBA 2K16, Visual Concepts hasn't made many improvements to The Gauntlet's numerous gameplay flaws.

-Though bans have begun to hit MyPark abusers, I've seen no indication that Visual Concepts is banning people who support buying/selling MT through illegal third-party services, even though this blatant TOS violation is becoming more commonplace in the MyTeam community, and the evidence of evildoing is incredibly easy to trace (why else would anyone buy a bronze card for a million MT?). 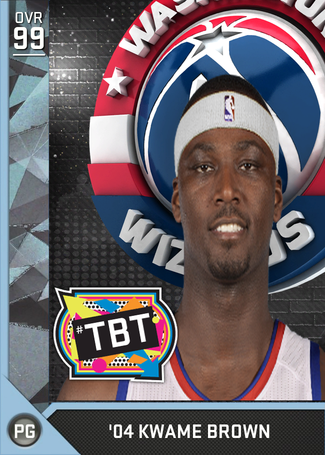 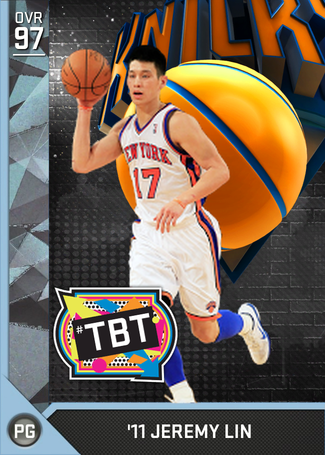 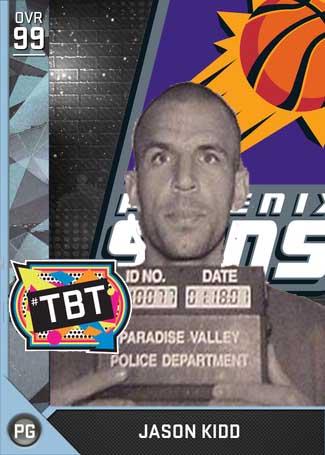 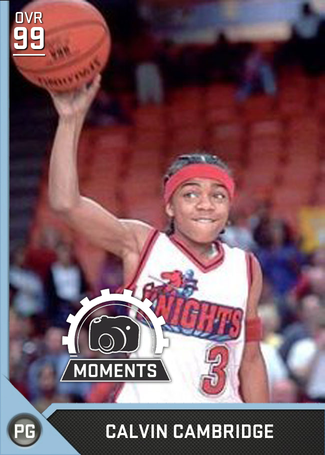 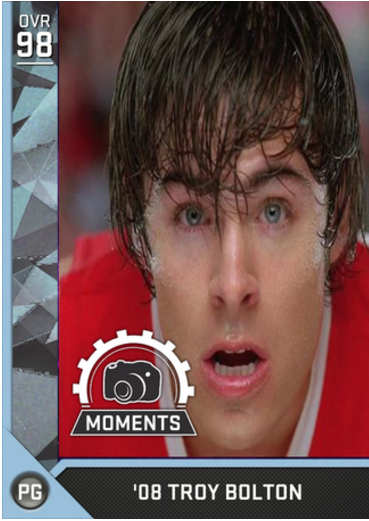 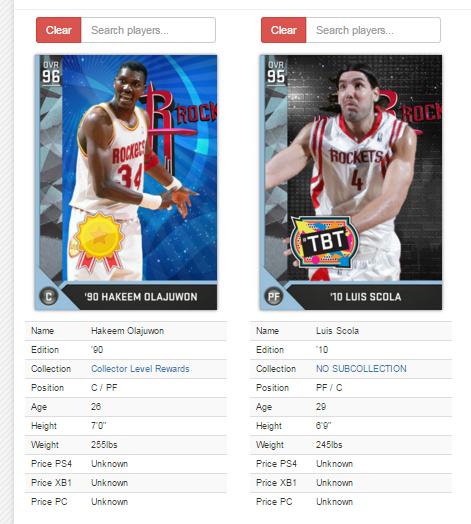 This is something madden ultimate team is famous for doing. Im guessing 2k took notes from it

# 5 thormessiah @ 12/21/15 01:05 PM
I totally agree with the fact that it breaks the scale they set before the game, but at least they won't be ridiculously OP like in last years 2K where you could literally score 100 points with whichever diamond card you had. If you pla good defense and contest shots, they will miss period. However, the fact that the cards are over-ranked and their stats are way too high is clear. None of them, with the exception of maybe Kyrie, should be over 92. 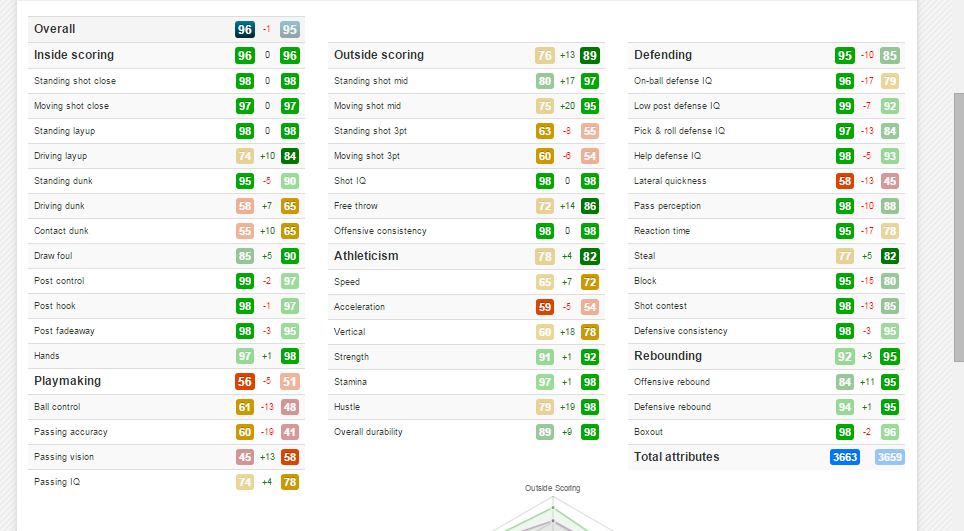 # 8 McG @ 12/21/15 01:53 PM
Thank God I don't play this mode, like in the past on other games. I can imagine trying to recreate an actual all-time greats team, or a '90's/'80's/'70's team just to watch all my time and effort (probably real $) just to go down the crapper because a 12 year old with mommas credit card bought some VC and gets a 95 Scola or a 96 Crawford. This is a disappointment, but hey if that is what the MyTeam crowd wants, then more power to them.

I just don't think at any point, during any game, these players had these high of an overall. IDC what their numbers were for one game, that would never merit an overall on par with HoF type players, period. 85 or 86 overall, that I could see, but not in the mid 90's. Those overalls are reserved for HoF type players (or that's what 2K said). This seriously just cheapens the game, in my opinion.

# 9 Real2KInsider @ 12/21/15 02:02 PM
I would still take Hakeem's rating set, but the fact that it's even close makes this a dumb idea. Whoever thought "Diamond Luis Scola" should be a thing deserves to lose their job.

Nobody in their right mind would ever ask for this; naturally here comes 2K, supplying to an imaginary demand.

# 10 knick9 @ 12/21/15 02:12 PM
2k obviously has a working relationship with some of these NBA players getting diamond cards but I can't understand the whole Scola thing, does he help them with big man animations or something? There HAS to be a reason they gave him a diamond card that only has to do with him and 2k. The whole thing is just disgusting. It's like if The Show made Daniel Murphy into Babe Ruth. Customers deserve so much better than this.


Sent from my iPhone with minimal cares for grammar, spelling, and punctuation.

Glad someone with a voice is saying something about this NONSENSE.

Not only is it total BS garbage...it's also a money-grab.

On top of that...its also a direct CONTRADICTION of their brand new 'legends scale' ratings. And shows they didn't even bother listening to their community after complaints about the SILLY Ruby cards they releases last year.

This game is going in the wrong direction.

It's trying to be too many things...all at the same time.

It's NBA Jam, NBA Street, NBA 2K, and a basketball RPG all roles into one...

The mishandling of MyTeam has been a problem for a few years now...

# 15 worstsportsgamer1977 @ 12/21/15 08:48 PM
2k this year has bit off way more then they could chew. they dont seem to have the manpower to keep up with this mode. seems like they just do what is easiest for them. which is just to make new cheesy cards like they did last year with their ruby series. "this is not the content we are looking for."

Surprised you missed my sarcasm there....lol

So ridiculous to have him in the 90's

# 20 jfsolo @ 12/22/15 12:09 AM
I'm asking this as a legitimate question since I don't know anything about these card collecting modes. Isn't the sole purpose of this mode really a pure fantasy land revenue generator with no concern at all for any kind of NBA verisimilitude.